See how ACTIVE's leadership team in China is giving back to the community.

3
min read
—
Company News 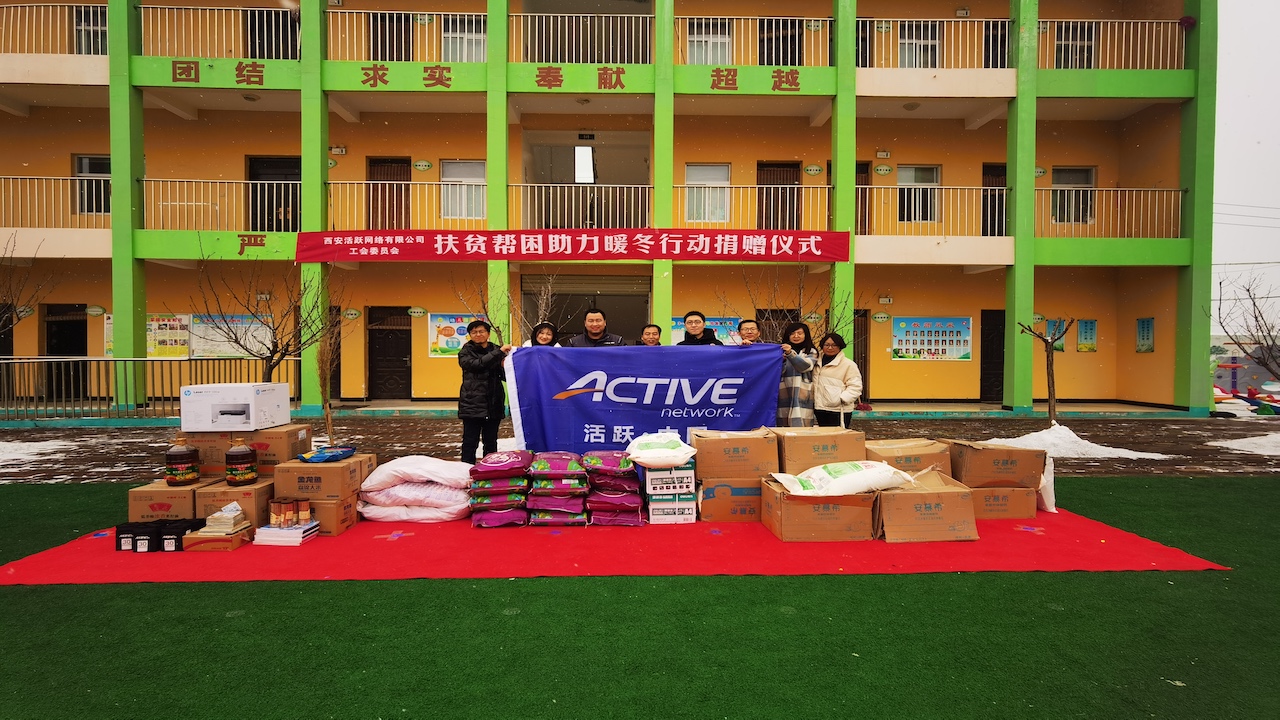 The arrival of heavy snow means the official start of the midwinter. In the city, the dancing snowflakes were not able to awaken the children in their warm blankets. A new day starts from the bustle of hawkers and smells of delicious breakfast.

In Doujia Town, a poor area a hundred kilometers away from Xi’an, the children of four or five years of age have gotten up early, and stand shivering in their thin rags and wait for the school bus to take them to Kindergarten. It takes an hour’s drive.

Doujia Center Kindergarten is the only public kindergarten in nearby villages. There are more than 120 children. Most of them are children left behind including 28 kids from poverty-stricken families. Like all the other children, they are equally curious about the world, love learning, and have big dreams. However, the conditions there are far from enough to support their dreams.

On December 7, the representatives of the ACTIVE Network Xi’an Trade Union, Peter Wang, Jay Guo, Maik Zhang, Jennifer Jiao and Jennifer Yang went there to send the children supplies, including rice, flour, oil, printer, crayons, books. Their car bumped along the rough mountain road for 2 hours in the bad weather to get there.

The members of the Trade Union had a tour conducted by the principle. They also had lunch with the children together. Speaking of food, Principal Ma was quite worried. Although the kindergarten receives financial support from government regarding the facilities, the resource is still limited. To keep the children well fed and healthy is still the most important goal, but they are struggling. It’s not possible to do so with current financial status. “The donations from ACTIVE Network Trade Union is great for the kindergarten, so that money can be spared to improve children’s meal quality", the principal said excitedly.

Doujia is the poorest town in Yongshou County. The sterile land and rugged mountain road block job opportunities. Most of the parents have to seek job opportunities far away from home. As a result, children are left with their grandparents. They are barely provided with a good and stable upbringing.

ACTIVE Network Trade Union has always wanted to fulfill the social responsibilities with the slight strength. General Manager of ACTIVE Network Trade Union, Peter Wang, emphasized that charity needs to be done in the most efficient way, send warmth to the places where they are needed most and make good use of the most common supplies to help children feel more comfortable in this cold winter. During the students' nap time, representatives paid visits to some children’s home to further understand their family conditions and growing environments.

‍
One six-year-old kid, Cheng Cheng (pseudonym), both of whose parents passed away several years ago, was brought up by his elder grandparents. When the representatives went there, he and his grandfather went to the farmland. Per his grandma, he is very sensible and often helps the family do housework. He has learned a lot in kindergarten and looks forward to going to elementary school in the town. On the way back, the representatives ran into Cheng Cheng, who was helping his grandfather hold some firewood. He yelled at the representatives happily: ”Thank you, uncle and aunt! Goodbye!” with face reddened and fingers “bruised” from the cold wind.

Another five-year-old kid, Xuan Xuan (pseudonym), lives with her father and elderly grandmother. Her mother's departure makes her a little introverted, but she still greeted everyone very politely. When Xuan Xuan's grandmother was mentioned, she seemed a little worried and whispered that her grandma was sick and lying in the next room. We learned from the principal of the school that her grandma was paralyzed last year and was being taken care of by her father, which made her family much more difficult. As the representatives were leaving, Xuan Xuan happily said goodbye to the representatives, meanwhile it was noticed that the soles of her shoes were barely held. The next time the ACTIVE Network Trade Union returns, new shoes will be brought directly to her.

There are too many children in need of help, and there are too many stories to tell, including Xiu'er (pseudonym) who lives with her younger brother, sister and grandparents in the cave; Jiajia (pseudonym) who is too shy to accept hugs. Their cute red faces, shyness, happy and polite goodbyes remain in the team's memories. Their precociousness is surprising, and their innocence is touching. Even though life is very hard, the bright smiles with the gifts are the most beautiful scenery this winter.

The representatives were back to school at 2 o’clock. Peter brought a special “Internet Enlightenment” charity course to the lovely children.

They were timid at the beginning, but with teacher Peter's encouragement, these children quickly became active. From the very beginning "Spiderman World" to the last "The speed of the Internet is circling the earth 7.5 times per second", these children gained a preliminary perception of what the Internet is. Many children rushed to tell "Teacher Peter" that they would realize their dreams with internet when they grew up. "Teacher Pi" was successfully named today's favorite.

The representatives gained a lot of thank-you letters from the lovely kids and felt warm. To give is to gain. The givers also achieve a greater sense of personal satisfaction and growth. The children in Doujia Town will grow up, and it is the team's hope that these small actions can sow the seeds of love in their hearts. Even if the future is stormy, they can always use their childhood memories to warm their lives.

ACTIVE Network Trade Union's action is just beginning. They hope more and more volunteers could join them, and provide more help to the children in Doujia Town. The kids lives will become better and better because of you!